When we talk about La Inédita, we are talking about a Peruvian band, formed in Lima in 2010. What makes this band so unique is the music mix of dancehall, hip hop, rapping and Chicha (a Peruvian cumbia style).

Getting together just to jam and have fun, that's how it all started. This is how they came up with Chichamuffin, the music style they named after they mixed Chicha with ragamuffin. Soon enough, the band began to play in many gigs in Barranco and Downtown Lima.

La Inédita is positioned on top of the Peruvian independent scene. Exploiting the many musical influences of its 4 members, La Inédita has created his own style: CHICHAMUFFIN, fusion of Chicha (traditional Peruvian cumbia) of Raggamuffin and Dancehall with subtle touches of Hip-Hop and other nuances.

The power of Chichamuffin broke boundaries from the start, being recommended in the press of USA, Europe, Mexico and South America. In 2015 La Inédita was part of the SXSW Festival in Austin, TX where it was selected by the organizers of the event among the 32 must-see shows within the framework of 2000 bands worldwide. La Inédita ended their festival touring around the east coast of the USA, taking their music to Washington DC, Brooklyn, Manhattan, Queens, New Jersey, Port Chester and Fort Lauderdale in Florida. In August the band toured Europe, participated in the Afrika-Karibik Festival in Germany and Milano Latin Festival in Italy, also did a show in Zurich, Switzerland.

Territories covered by us include Austria, Switzerland, Czech republic, Slovakia, Italy, Croatia, Poland, Scandinavia, Hungary, Serbia Slovenia, The Baltics, Ukraine and Russia.
For other territories please enquire and we'll point you in the right direction if we cannot help. 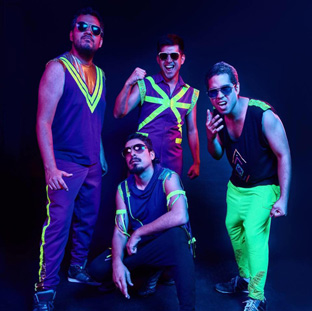