So moving into our rock and punk territories we have this utterly awesome artist from California - kick ass doesn't even come close...

KIDFORCE is the brainchild of Rhett Raha, who started performing in a rap/rock band at age 14. By 15 he was writing, recording, dropped out of college at 19 with his electro/pop band Kid Force. Recorded an EP out his bedroom that garnered a thousand downloads over six months. Trouble Andrew approached them to remix his song "Chase Money" which made it on Fuel TV's Elektro Circus snowboarding commercial in 2010. In that same year, Rhett was contacted by Christina Aguilera's producer Charles Roane asking for demos for her 'Bionic' album and a chance meeting in Hollywood with Europop band The Black Pony led to a swift collaboration with guitarist Eugene Flitner. The resulting song, "Crush", made the band's album and was a hit on their "Crush Tour 2011". By the summer of 2011 the other members had left Kid Force, so Rhett appropriated the name KIDFORCE for himself.

KIDFORCE has been aggressively hitting the Los Angeles and Hollywood club scene with his party punk live performances including a Southern California-based High School tour, opening for acts at varies clubs from The Roxy to The Avalon, 10 dates in Russia from 2012 to 2013.

Now the twenty-three year old performing in Hollywood, New York and Chicago with internet sensation Sam Pepper and MazziMaz for the WDGAF Tour presented by Live Nation and Sochi, Russia during the 2014 Winter Olympics in February. 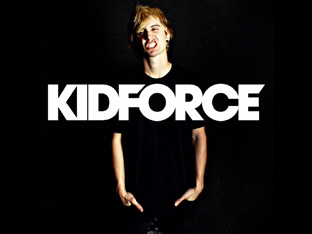