Delighted as we are to welcome this funkadelic band whose career spans quite a few years and more than a few festival appearances .. Want to dance, want to chill then you've arrived at the right platform for the right train...

Orchid-Star's 3 core members - Pete Ardron (kbds), Myo (vocals) and Pierre Luigi (guitar & bass) - perform on their own or with up to 7 (adding fiddle, brass, percussion and dancer) or sometimes more.

The band was formed in 2005 by Pete - initially to perform music written for chill-out DJ sets. His previous band Glow was well-known on the UK global-dance scene in the late '90s and he has worked on projects with Afro Celt Sound System and N'Faly Kouyaté. The band steadily took on its own identity and direction as the members brought their own personalities to the sound and their 2011 album 'Faster' saw them embracing the dance-floor following the sublimely chilled-but-beaty experience of their 2008 release 'Birth'.

Their long awaited 3rd album 'Merge' is now out

"..simply exquisite with the perfect blend of electronic and world music with simply stunning vocals. No matter how many times I see them perform it still makes the hair on my neck rise!!!!" Bruce Elliott-Smith (Archangel^/Waveform)

"..a sound to behold, fearless in its vision and sublime epic ambition yet fragile and very delicate in the details. Give thanks such rare flowers as these still exist." Youth 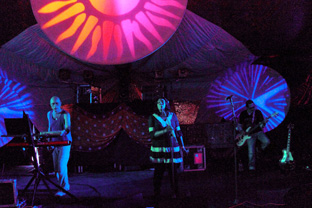