EZZA impresses by their desert blues-rock, rebellion-fuelled rhythms and three-piece dynamic and soul-stirring melodies. They produce a more contemporary sound than previously associated with Saharan music. Starting from Agadez and Azawad then the world, the Tuareg music has grown with Tinariwen and now lives with EZZA.

Melodies and groove drawn in the desert, a tasty mix of blues, rock, and Tuareg songs ... the trio EZZA talks about the Niger, country of singer Omar Adam, through an hopeful and committed music.

"Ezza" is the last letter of the alphabet Tifinagh, and is the symbol of the free man (Amazigh) and resistance. From their second album "Alkher" (Peace) results a modern and universal music but that doesn't betray the essence of traditional music from which it is rooted.

"Chez moi by Ezza, an act whose three piece groove on Bass, guitar and drums is reminiscent of Cream" - Cerys Mathews, The Guardian 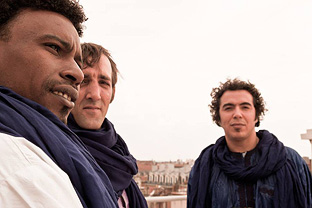