Formed in the late 1970s as an art collective, The Mekons are one of the longest-running and most prolific of the first-wave British punk rock bands. Through the years, the band's musical style has evolved, incorporating aspects of country music, folk music, alternative rock and even occasional experiments with dub. The band has experienced several changes in line-up since their formation 40 years ago, and although the current line-up of "Mekons" are writing and recording music, playing shows and touring, the original "The Mekons 77" have reunited and are playing live shows.

Following the release of critically-acclaimed album "It Is Twice Blessed"in 2018 , and the success of Mekonville - a weekend-long music festival organised and curated by The Mekons themselves, they reunited and continue to play shows by popular demand. And here at Fizzion we can make that happen for you ... simply ask! 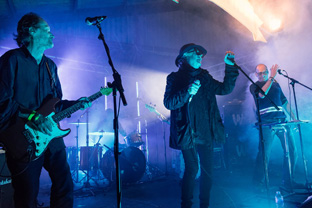