At Frusion we're delighted to represent Haight-Ashbury. The Glasgow psychedelic trio, described by some as Fleetwood Mac meets Jesus and Mary Chain, with their brand of 60's Folk harmonies and Bluesy Noise, took the world by surprise when the quiet release of their first single "Favourite Song" found its way onto radio stations across the world and was embraced by everyone from Country music fans in the USA to Italian football fans.

Despite their "underground" Psychedelic/Folk tag, their catchy vocals and songs gives them a broad appeal; on the notoriously genre specific US Radio they find themselves being played next to everyone from Willie Nelson to Vampire Weekend, from the QOTSA to Lady Gaga!

After only two gigs Haight-Ashbury were spotted by The Waterboys front man Mike Scott, and soon accompanied them on their 2007 UK tour. They've since played festivals and venues all over Scotland and England playing T in The Park, Belladrum and Connect. 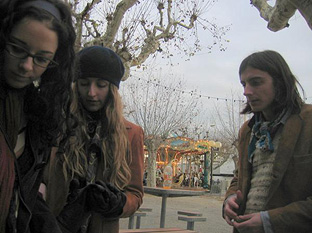