Truly original and wow what a sound...

Ran Shem Tov (Vocals and Viola), Shiri Hadar (Vocals and Keyboard/Bass) & Guy Ben Ami  (Drums) Cherie and Renno are Shiri Hadar and Ran Shem Tov, FKA Izabo. Izabo has been active abroad for many years, performing at some of the most prestigious festivals around the world and released three albums in international labels. In their new incarnation: Cherie is Shiri, Renno is Ran, and alongside stands an electric viola that Ran has designed and improved for years.

What began as the creation of a new instrument got a bit out of control: the viola became, during her several incarnations, an independent, opinionated and rude entity with life of her own.

With Cherie and Renno theyve performed at the Great Escape and Liverpool sound system.

Influences
Ran grew up as a guitarist, and along came the viola and changed everything. She really planted the seeds of inspiration for the songs from that moment on. The Viola is the neanderthal ancestor of the guitar, she's rough, dirty and takes no prisoners: and it reflects in the songs.
Name 3 Artists That Influence Your Sound: Jimmy Hendrix, Led Zeppelin, Kung-Fu Music.
Name 3 Artists That You Are Often Compared To: The White Stripes, Gogol Bordello, The Strokes.
Name 3 Genres That Best Describe Your Music: Indie-Rock, Indie-Pop, Punk. 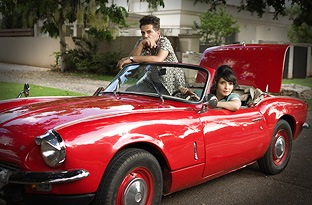