Never let it be said that Frusion does not push the boundaries and here we are yet again with one hell of a band mixing a true punk ethic with highland pipes.. you've heard it often before that a band kicks ass.. well in this band its absolutely true!

Pipes and Pints were formed in 2006 by Vojta Kalina (Highland Bagpipes/Vocals). Dreaming of a band that would combine punk rock with dirty folk music such as The Pogues. Soon after, he met Tomas Novotny (Guitar/Vocals, ex-Who Ate My Skate) who shared the same dream, though his was also flavored by a passion for country and rock and roll. They did not just dream. The first sign of the band's life was the release of their debut demo CD in 2007 shortly followed by tours throughout Central Europe (Germany, Austria, Czech Rep., Slovakia).

Lukas Vincour (Drums/Vocals, ex-Punkhart, ex-Thalidomide, ex-R.A.F.) moved to Prague from Moravia to join the band. So that he could sing, Syco Mike (Lead Vocals, ex-Mugshot76) scrapped plans to return from Austria back home to his native California and moved to Prague with only his dog Tequila to his name. Eventually, Ondra Balvin (Bass/Vocals, ex-Super Pilot, ex-El Paso), a good friend from the streets, squats, and clubs of Prague, also joined up to be a Piper, with no less passion for the band or his bass.

All in all don't miss the opportunity to have this mega band do a show for your audience, we doubt your audience will ever be the same again! 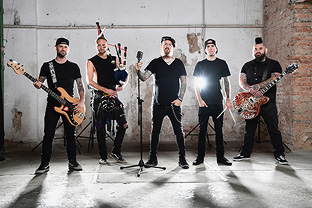