Slick, Sharp and Dynamic! The trio perform in their own formidable style, with a heavy dose of showmanship to a hip soundtrack of Latin Jazz, Ska, Indian and Electro Funk.

With their unique look inspired by everything from the glitz of Fifties Havana, classic sixties Indian cinema, right through to the Americana Soul Movement of the Seventies. 'The Twilight Players' are a slice of British cool, forever bringing classic retro-vibes into the 21st Century.

Their global appeal has taken them everywhere from Glastonbury to Mumbai, Los Angeles to Casablanca and a few ports in between on a amazing fun-filled adventure with a host of colourful characters along the way.

The guys have body of work to amaze anyone .. just ask us as there is just too much to mention here .. but if you take a look at the video compilation on this page and you'll see just what we mean

The Twilight Players were awarded the first ever 'UK OG's 4 Life Award' at the prestigious Carnival Choreographer's Ball 2005. 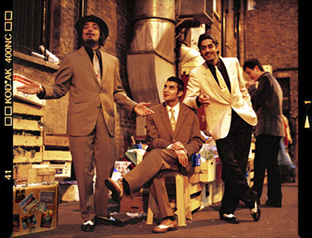