British electronic duo Addictive TV create music with a difference; it's music you can see. Once so eloquently described as 'next level shit' by Grandmaster Flash, The Times described them as "responsible for mind-bending live entertainment" while DJ Magazine twice voted them #1 VJ in the World alongside their Top 100 DJ Poll, saying "they've become famed for their eye-popping live shows, shredding and cutting film with beats into a heady, mind-meltingly funky mixture".

From 2014, they have two live shows available for booking: their incredibly popular and dynamic audio/video remix mash-up set and their new more down-tempo performance 'Orchestra of Samples' - a unique and innovative project based on sampling recording sessions the duo filmed with more than 100 musicians around the world, fusing all manner of styles and instruments, creating a virtual supergroup of international artists who never met.

The duo are trail-blazers in the art of audio/video remixing and in 2006 were the first ever artists to be sanctioned by a Hollywood studio to sample and audiovisually remix a movie, they've since created a number of official alternative trailers for most of the Hollywood studios, remixing films like Slumdog Millionaire, Iron Man and Fast & Furious.

Addictive TV are a total audiovisual experience, sampling and remixing everything from cult movies to rock icons and even football.  They've now played in over 50 countries from China to Brazil, Mexico to Japan and all across Europe, in settings as varied as the Pompidou Centre in Paris, Womb club in Tokyo, Glastonbury festival in the UK and in Grenoble in France for the record-breaking World's largest ever silent disco with 10,000 clubbers all with headphones!

"Orchestra of Samples" is our new performance project. A concept based on sampling recording sessions we filmed with more than 100 musicians around the world, fusing all manner of styles and instruments.
Wanting to explore new forms of collaboration, we've spent the last few years filming these improvised recordings sessions with musicians in over twenty countries, including percussionists in Brazil, Spain and Tunisia, drummers in Turkey and in Senegal in West Africa, singers in Bhutan, Japan and in Mexico, flutists in Egypt and in Israel and a whole range of instruments in Europe, including the futuristic sounds of the French Baschet instruments and even acoustic drums from Motörhead's original drummer.
We then sampled this unique archive to create new visual music, to create a kind of virtual international supergroup of artists who never met, but where the audiences see the samples. Click here to go to the blog and read about all the recording sessions and click on any of the thumbnails in the galleries to open the photos. 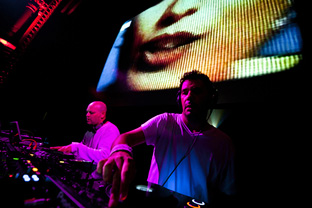