Well what do we have here? Between rock and folk, EPSYLON (to an English speaking audience the letter Y) is one hell of a live band, combining their local traditions but with a genuine rock vibe and brilliant stage show these guys will rock and roots your world. Coming from Brittany their sound is truly breathtaking... just a few of the festivals where they have appeared are Poupet festival, Zenith de Nantes, Dranouter Festival (Belgium), Nanjing International Festival (China), and many others...

They've shared stages with Absynthe Minded, Sergent Garcia, Goran Bregovic, Ruda... and ensure the first parts of Katerine, Cali, Soldat Louis, La Rue Ketanou and blown away audiences just about everywhere and we're delighted at both Frusion and Fizzion agencies to welcome to the roster.

With the release in 2014 of their third album "Time Factory". produced with Gambeat (bassist for many years with Manu Chao), a China tour (15 dates) followed by numerous festivals in France and Europe. 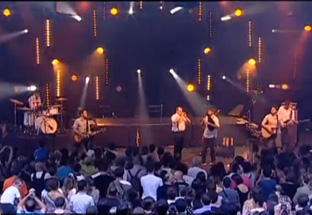