Cobario is a one-of-a-kind world music trio from Vienna, Austria. Beginning in 2006 as buskers in Barcelona, they developed their unique style of playing which casts its incomparable spell with passion and finesse over a pleasure-loving audience. Having won multiple awards we are delighted now to be representing the band exclusively in the UK and also for selected territories, they are simply magnificent both live and their recorded work.

Flamenco, Gypsy, Celtic, Slavic, Asian and contemporary influences all contribute to the unique yet familiar sound and invite the listener to close their eyes and escape from reality. In the last few years Cobario has been expanding their audience  this superb, engaging ensemble not only delighted listeners at festivals across Europe, but also enchanted thousands of listeners in Canada and Asia. Since 2014, with their records "Royal" and "10 Welten", Cobario started to extensively tour in Germany, Austria and Switzerland wth over 30 concerts in 2 months every February and March.

So good are the band that previously they have been selected as part of the New Austrian Sound of Music a touring initiative for the very best of new music from Austria, they are simply that good!

Violon: Herwig Schaffner aka "Herwigos" began playing the violin and the piano at the age of eight, and was invited to attend the prestigious University Mozarteum Salzburg at only sixteen years of age. Performing in several orchestras including the European Youth Orchestra, and played under the direction of Yehudi Menuhin and Sandor Vegh. As a youth he was already touring Europe and Asia, playing in cities like Istanbul, Berlin, Beijing and Shanghai.

Georg Aichberger aka "Giorgio Rovere" began playing the guitar as a teenager. After years of self-taught playing, Georgio attended the University of Music and Performing Arts Vienna to study with Arnoldo Moreno, who showed him the world of Latin Music and numerous other possibilities of styles on the nylon guitar. studied in Vienna and Sydney, and played different styles of music in several bands. His musical journeys took him to lots of places, such as Spain, France, Germany, Croatia, Australia, and many others.

Jakob Lackner aka "El Coba" became obsessed in his early teenage years by the sound of guitars. After three years of learning on his own, he began studying with Bernhard Schnabel (classical guitar), Erich Zinner (electric guitar) and Austria's famous Peter Ratzenbeck. Until the age of 20, Jakob played in several musical projects covering many different styles, until he founded Cobario.

A happy accident occurred after many months of playing on the streets of Barcelona, when they met Herwigos while playing on the Streets of Vienna in Summer of 2007. And the rest as they say is history .. we cannot emphasise enough how brilliant these guys are and with multiple albums in their pocket and more ahead .. take a look and a listen you won't be disappointed. 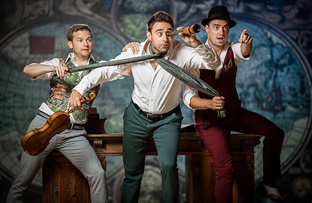