Utterly delighted to represent this great project here at Fizzion.

'Motion' is a new collaborative album from established sound artists, Toby Marks and Andrew Heath. Four immersive soundscapes were created and compiled using field recordings from recent trips to the North, South, East and West of Britain. Each trip took as it's theme a particular form of transport which, in addition to other environmental sounds from those areas, have been processed and transformed, blending piano, guitars and electronics to produce a deeply meditative, endlessly unfolding collection of tracks. Sometimes evoking images of machinery, sometimes of nature, the pieces flow and twist, at all times maintaining a humanity and sense of personal experience at their core.

Performed live, the pieces are partly composed and partly improvised as both artists follow the lead of the recorded sounds to guide their playing. Sometimes intense, sometimes barely there at all, the music enthralls and entices, drawing the audience into a world both seemingly familiar and strangely unknown.

Accompanying the music are live video manipulations by Patrick Dunn, created from a blend of real-world imagery and computer generated scenes.

In his guise as Banco de Gaia, Toby first came to the world's attention on the Ambient Dub compilations of the early '90s. Since then he has focused on globally inspired dance music and deep ambient explorations and meditations.
Best known for his 'ode to Tibetan independence' Last Train to Lhasa, Toby has more recently been expanding his interest in ambient and electroacoustic music, moving from the dance floor to the sofa to explore his long-held love of the beautiful, the exotic and the sublime.
On stage he mixes computer-based electronics with real world recordings and occasional guitar, producing an engrossing and uplifting journey through his ambient work.

A soundscape artist and composer, Andrew Heath creates quiet, ambient, lower-case music based around piano, electronics and field recordings, drawing inspiration from a simple piano motif, an electronic shimmer or a processed found sound. The work he produces blends piano, electronics and found sounds into a mix that on the surface sounds quite minimal and open, but on closer listening, contains detailed fragments, constantly shifting and changing place.
In performance, Andrew Heath re-interprets his studio work weaving multiple layers of textural field recordings balanced with ethereal whispers of electronic sound and half-glimpsed piano melodies. Recent performances have seen him add acoustic instruments to his palette often bowed or e-bowed, but certainly not played conventionally.

This is immersive, ambient music. It drifts. It constantly shifts as it charts new topographies, creating and following maps that are full of change. 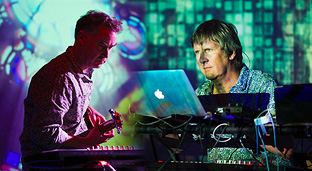