At Frusion we?re proud to source music from high quality bands from around the planet and in seeing , experiencing these guys at the Ost Klub in Vienna Ian was blown away , with Echoes of the great Les Negresse Vertes but with a different musical base.. here they are from Hungary ?..

If anybody is still trying to define the style of their music, the Psycho Mutants have long ago given up. The five member band known as PM is a powerhouse of dark pounding energy. The voice and charisma of the singer lend the music an ambiguous and sometimes sinister air held together by the driving rhythm of drums and the pumping bass. Supporting vocal' lead is the delayed, psychedelic subtle melody rhythm guitar.

Lay on some French accordion, trumpet... and you have a band with unbeatable stage presence that will keep the audience moving.

The Mutants performed were born a mere 5 years ago, but their music already feels like an aged tasty whisky. They have already toured with many foreign bands, gigged in important clubs and festivals in Hungary, France, Serbia, Switzerland, Slovakia and Austria, and have just released their 2nd full length album, Tango with me, at the end of 2010. 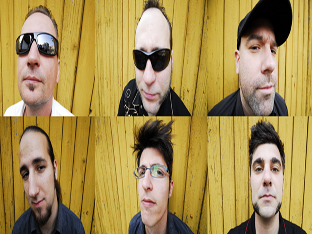