is an improvisational avant-garde Irish fiddle-player, composer and doctor of music. He continues to tour and record internationally as well as collaborate on various fusion and multimedia projects that include anything from electro acoustic improv collectives to Hollywood and European art-house film productions.

And here at Frusion and Fizzion agencies we're delighted to offer Eoghan (pronunciation is similar but not quite the same as Owen) this is for SOLO and other line ups .. ask for details.

Among many more accolades, he has toured extensively with Riverdance and the Anxo Lorenzo Band; recorded with the London Metropolitan Orchestra and Torrek; featured on the soundtracks of Cannes Festival winner Hrútar and Oscar-winner Kevin Macdonald's feature The Eagle; as well as composed the award-winning score for theatre production Selkie and the half-million YouTube hit instrumental piece Return of the Eagle along with Atli Örvarsson.

His interests are in avant-garde ergonomics and free improvisation, together with the exploitation of these musical elements across interactive multi-media technology platforms. He works exclusively with the acoustic and prepared fiddle, deconstructing and reconstructing myriad Irish tunes and new compositions. Virtuoso lines are stimulated spontaneously and erupt over a symphony of idiosyncratic sounds that are built up and looped live all from the one instrument.

"a goldfish-bowl of technique and artistry" - The Sunday Tribune

"if he has sold his soul to the devil to play as he does, he has definitely got the better part of the deal!" - Fatea Magazine 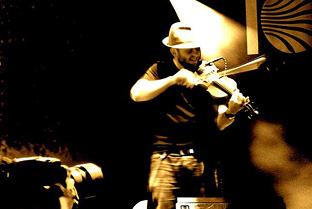