For this the 25th anniversary year of Alegria 2019 (Cirque Du Soleil) are again touring this iconic show where Francesca starred for approx. 700 performances around the world. Though Francesca will not be appearing in this anniversary production, its a timely reminder of what an amazing artist she is and continues to be with multiple projects and constant touring throughout the years.

Touring and general concert enquiries welcomed all year round:
Currently taking enquiries for Autumn / Winter 2019 through to 2021

Francesca Gagnon (the voice of Alegria - Cirque De Soleil) with Rene Dupéré on piano (multi Grammy-nominated composer also of Cirque Du Soleil) and we are also offering with accordion as trio and additional string quartet for some shows.

What a magnificent artist, we are very happy to present this very special international artist for performances in multiple territories. Born Francesca Gagnon, in Jonquière, Quebec, this blond gipsy became renowned doing shows to 2500 patrons per night on three different continents under the massive big tops of Cirque du Soleil. Francesca was the premier vocal artist of the Cirque de Soleil production of Alegria for several years, in fact a voice associated with pure quality, a major international artist and one of exceptional talent available with multiple projects and very special shows.
Over 7 Albums recorded with one with over 3 million copies sold world-wide. Over 250 TV appearances. Over 3,000 Performances around the world.

We are offering Francesca with multiple options so please ask but one of the main shows we are now presenting is with Rene Dupéré on Piano: composer of many of Cirque du Soleil's shows and a Grammy nominee, Dupéré's album of music from Cirque du Soleil's Alegría was nominated for a Grammy Award in 1995 and spent 65 weeks on Billboard's World Music Chart. The albums Mystère and Kà also spent several weeks at the top of the Billboard charts. As of 2009, Dupéré has sold over 3 million CDs Alegria goes double platinum in Quebec and sells over a million copies worldwide.

René Dupéré and Francesca together again. A superb conversation between his piano and her voice ensues, binding the talents of the two in a way allowing some famous classics of French and World music to shine. 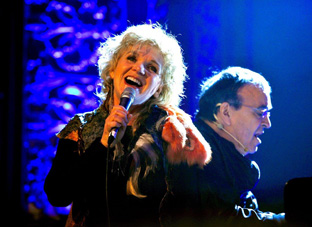