One of the UK's most iconic live electronic-based outfits Kosheen broke to prominence with their debut hit, Hide U, from their debut album in 2001 (platinum-selling "Resist"), followed by crossover hits Catch, Hungry and All in my Head. Two top ten albums topped the UK and European music charts and won numerous awards with their unique blend of breakbeat rhythms of drum and bass all the way to more traditional songcraft. This championed within the band by singer-songwriter Sian Evans who leads the band today. Five studio albums and an enviable reputation for live performance are still at the heart of what Kosheen is today, with Sian firmly at the heart of the band.

Two decades at the time of writing here in 2021, Sian has reinforced that reputation as featured vocalist and dynamic frontwoman. Having collaborated with top-level producers, amongst whom are counted DJ Fresh, Stanton Warriors, Roger Shah, Headhunters and many more.

It's well known the band dissolved in 2016, and over the last years since they debuted a new live show! and creating a new perspective for Kosheen as a live band whilst retaining all that made and still is Kosheen. Sian's shows have been well received across Europe, Asia, Russia, Ukraine, Belarus and countless UK shows/festivals. Breathing new life into the set with original Kosheen drummer Mitchell Glover and world-class musicians bringing a new edge to the band's sound. 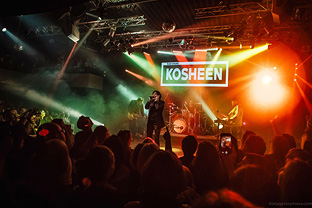