(In collaboration with Exits management)

From one of the brightest places on the planet come Els Catarres, a Catalan based band who simply rock your socks off .. full of life superb musicianship and a truly AWESOME show .. we can't recommend them highly enough. A party on stage and off ... 3 albums, the highest viewed video clips ever in Spain with "Jenifer" at 2,7000,000 views and "Vull estar amb tu" at 1,7000,000 visits. Album downloads of 500,000 and believe it or not physical album sales in 2015 of 30,000.

Awards:
5 Enderrock awards - best artist, album, song and lyrics
RNE4 award best album of the year 2014
Best touring band in the ARC live music awards Catalonia
And with their second single "Rock n Roll" became the sound of summer on Catalan Radio and TV
Want the sound of Catalonia in its entire glorious colour and a true party for everyone then this is the band for you  working exclusively in the UK and for some other territories. ASK NOW 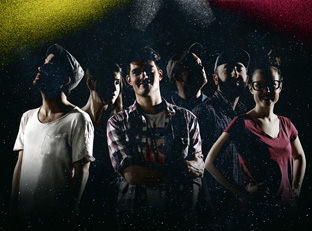