KATH formed in 2011, and their first single "Don't You Worry" was signed by HedKandi and did pretty well! Their second single "Shut Up And Dance" was released in 2014 on 3star Deluxe along with a cool and quirky video and some fab remixes. The video for that tune has over half a million hits on YouTube, which is extremely good for a word of mouth independent record. They've also self released a few other singles, including Don't Touch the Kitten and, at the end of 2015, I Wanna B Onnit.

They released their debut album "Hello Kitten" in the spring of 2015 on Pedigree Cuts.

KATH have also teamed up with up and coming young talent Rory Hoy, together they are producing some amazing and timeless records, including "I'm Ur MF", "Who's Gonna Pay for That" and their latest single "Dirty Little Secret" which is out now.

For the first three years of their career, KATH delighted many crowds at some of the world's most famous festivals, including Glastonbury, Secret Garden Party and Wilderness. They took a year off after their much viewed X-Factor appearance, but are back out on the road in 2016-17 with a new line-up and quite a few new songs.

Kitten and The Hip features the fabulously talented Scarlett Quinn on vocals and the semi-legendary Ashley Slater on vocals, trombone and production. Joined with live drums for some shows. 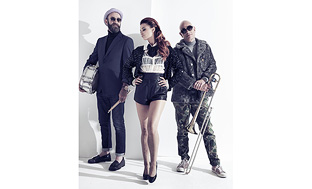