Is a group of multi-instrumentalists /singers from Amsterdam and Mexico City. Playing original songs, which they describe themselves as pop/folk/opera/avant-garde-cumbia.

Drawing on uncommonly contrasting musical backgrounds the members of Snowapple form a remarkable ensemble. Their giddy leapfrogging between genres, combined with the wide range of instruments they play, creates an incomparable sound.

The group started as a trio in Amsterdam, but during their travels to Mexico city they one by one picked up an adventurous and diverse group of musicians, adding Mezcal and summer-vibes to the music and expanding Snowapple into an even more explosive, eccentric and theatrical act that it is has become.

In 2018 the band toured in Mexico, UK and Europe with their latest album 'Wexico' which was established together with their Mexican friends. Currently the group is working together with Studio MAPA, actress Nora Tinholt (NL),visual artist Adriana Ronquillo (Mex) and journalist Pedro Miguel (MEX) on a music theatre play with mime and puppetry. The project has the aim to empower woman worldwide and speak of the current situation in Mexico (Los Feminicidios). 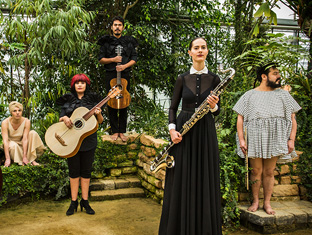