Electro Brass, oh yes and lots more, this really cool and brilliantly live band absolutely kick it Erwin & Edwin" formed by four young Austrians based in Vienna, on stage 5 with ultra cool rapper uniting their diverse skills and creativity create a unique and energetic slice of Electro Swing. BUT not wanting to be restricted to genres, they bring electro, funk, hip-hop and rock. Massive instrumental band and with songs in German and English they rock!

Berlin blog Rebellen "Erwin & Edwin always works, no matter what crowd" the band has been proven on more than 200 stages such as Frequency, Open Flair and Heimatsound Festival.

"The band's powerful live performances make crowds jump until their sweat drops from the ceiling"... red hot doesn't come close to describing this brilliant band...! In 2019 with the release of POWER in collaboration with rapper Alix .. well wow what can we say ... we cover all territories other than Austria and Germany, otherwise we can cover anywhere. Simply ask 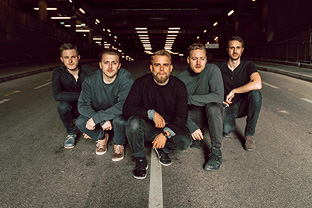