When London based multi-racial 8-piece Maroon Town first started out 30 years ago they were the first ska band to have begun mixing ska and reggae with rap, funk and Latin/cumbia to produce a fresh new world music sound with conscious and uplifting lyrics. Their first album and singles were produced by John Bradbury of the Specials. These recordings propelled the group to get the attention of the international music community and led to extensive touring in Europe, Japan and South America.

A long-standing relationship with the British Council saw Maroon Town perform in over 15 countries from Kosovo to Tajikistan and from Brazil to Brunei playing in theatres, festivals, schools, community centres, universities and even prisons. Their songs have been synched to major Hollywood films and they continue to provide a brilliant stage show!

Still at the cutting edge of creativity their sixth and latest album 'Freedom Call' released on the Spanish label 'Brixton Records' in 2018 blends conscious reggae, jazz, Big beat ska as well as an up-tempo ska collaboration with renowned Basque Country reggae, rock and ska singer Fermin Muguruza. (Spain, particularly Catalonia and the Basque Country has long been a touring destination for the band)

In 2018 Maroon Town played at Skabour (UK), Boom Town, Freedom Sounds Festival and Querbeat (Germany), the London International Ska Festival and at Foc a la Feixa (Spain - June 23rd) and many other venues. Each month the band run a club night at the legendary Troubadour in London with net profits going to the Alpha Boys School in Jamaica.

The result is a unique musical blend that has hooked fans and audiences from all over the world for over 30 years. Now available through Frusion and Fizzion in ALL TERRITORIES 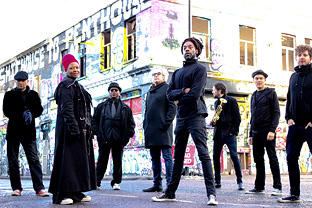