A truly superb and stunning work available through Fizzion for multiple territories. Featuring one of France's most iconic and powerful actors Denis Lavanat (Holy Motors: A very long engagement) and an enormous repertoire ... it's a supreme experience and show, poetry, or is it, music from François R. Cambuzat/Gianna Greco.

Literature. Theatre. Extra-Contemporary Poetry. Post-Industrial Music and Magnificent Savagery. Literary Trance. Misappropriations of poetic and musical techniques of the ecstasy, of the trance and the flight

Our human's task is to find some formulae which will calm the infinite anxiety of the free souls. Albert Camus, 1940.

A theatrical show? Atypical, certainly. What Denis Lavant and François R. Cambuzat looked for is neither the good word, nor the nicest rhyme nor the satisfaction of the beautiful souls, but this magnificent savagery, this loss of one in surge, this gypsy and universal duende so close to Sufism and so dear to Federico Garcia Lorca, without which everything - the beauty, the technique, the apparire  is totally and perfectly useless.

The music is not improvised, but written and of steel, in structures faithful and merciless as decades without bread. It is the basis, the weft on the which the revolt rests. François R. Cambuzat welded the arrangements, Gianna Greco milled the sub-basses. The compositions evolve to disturb the Voice, to destabilize what was already said, to create other desires - specially for other impulses. Everything will die and be reborn. So a Uyghur song can replace a valve, a Turkish Ney would blast a steam machine. Guitars and computers.

Without this trance, this ecstasy taking over any restraint, the word would be only the show of our hypocrisy, our conservatism, otherwise our vegetated death. And this, in a world that should be so magnificently revolutionary, would be of an infinite sadness otherwise a dirty crime.

The theater will be the arena, the bullring of a deafening spurt, of thoughts put in words by the current, the very-present pre-revolution Era, by this tremendous essay to build a Society. Together, it seems!

Denis Lavant keeps silent, comments, raises or provokes, according to his choice of the instant/instinct.The music opens a breach, frees any drives, fears or fantasies. Catharsis will operate first of all the transformation of the thought in emotion. 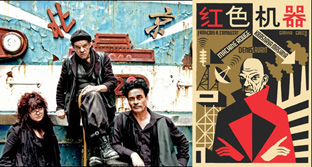