Big Pollo formed in 2006 in Lima, Peru, established as one of the most vital acts of the Peruvian musical scene. They've created a unique sound from the eclectic tastes of their members: Chichafunky, a fusion of Funk and Chicha (Peruvian Cumbia).

Big Pollo reaching fans all over the globe with their new sound. 10,000 Spotify followers worldwide and growing, toured United States recorded their fourth album in Buenos Aires, Argentina in 2020, and collaborated with international artists such as That Kid Is You from Los Angeles and Souljah Bless from Orlando. After three albums published, the band is releasing their new 14 track LP in early 2022. "Provoke" your body and shake your soul with spicy Peruvian rhythms. Ready to experience Chichafunky? You wont regret it !

BIG POLLO throughout their 15 years more than 500 concerts in Peru and USA, small venues to large stages, audiences of up to 5000 people,

C'mon book them now for your venue you know it makes sense! 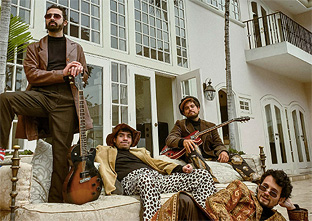