Hackney Colliery Band have had a simply phenomenal few years. From playing a 45 minute set at the Closing Ceremony of the London 2012 Olympics and sets at the MOBO, Brit and Mercury Awards to live sessions on BBC Two, BBC Radio 2, Jazz FM and worldwide airplay from many more, from collaborations with the likes of Amy Winehouse and Madness to headline shows at London's Koko, and a tour schedule even taking in the Faroe Islands, these east London musicians haven't stopped.

Part of the great appeal lies in their set list, which is as diverse as the London borough that gave them their name. With influences, as much from the world of contemporary rock and electronica as from jazz and global brass, they stand out in a music landscape increasingly populated by brass bands. A New Orleans-style line up of trumpets, trombones, saxes, sousaphone and two drummers, and a name which pays homage to the British brass heritage demonstrate that Hackney Colliery Band are rooted in tradition, yet sound thoroughly modern.

Able to be both a powerful acoustic ensemble as they parade through the crowd at the end of their shows, they're also up-to-the-minute contemporary when on stage, with carefully crafted washes of electronics and drum machines adding to the raw power of brass and drums.

Delicate one minute, powerfully energetic the next and always concluding in a huge party, they have enormous appeal across the age and genre spectrum. Their diverse tour schedule, goes from 1am club party sets, to sellout arts centre tours, to performances at Womad, Sziget, Wilderness, Cheltenham Jazz, Field Day, Blue Balls, Fusion, Glatt und Verkehrt, Mostly Jazz, Durham Brass, Larmer Tree, Boomtown Fair, Shambala and Love Supreme festivals (amongst many others). Combined with a relaxed stage presence and thoroughly British sense of humour (which frontman Steve Pretty has developed through his solo work with many high-profile UK comedians), their live show is able to have extraordinarily broad appeal without dumbing down, presenting sometimes challenging contemporary music to a general audience with admirable dexterity.

"Reinventing the brass band format for the 21st century" The Times

"Clever and enormous fun The Guardian"

"An ingenious blend of showmanship and intelligence" The Sunday Times 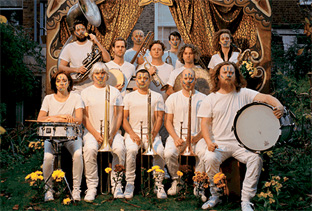