Music for the mind and body. You don't hear that every day. Hailing from Amsterdam but with Chilean blood running through their veins, TenTemPiés make you think and dance at the same time. Crafting their own unique blend of rock, ska, reggae and rumba, they turn every show into a true People's Festival.

The band has earned their live reputation mile for mile, touring around Europe, Chili and even China. Written by Maurino Alarcón and his band, their characteristic music is inspired by political issues and social injustice worldwide, adding a deeper layer to their festive performances; delivering a powerful message while evoking a smile at the same time.

Celebrating their 10-year anniversary, TenTemPiés close their album tour in March 2018 with a special concert in a packed main hall of Amsterdam pop temple Paradiso, and we are booking this great band just ask 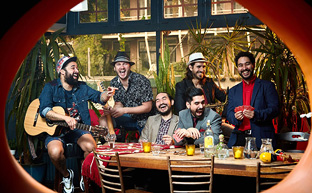