Ajay Srivastav is a London based singer songwriter and multi-instrumentalist who plays a genre-bending mix of Indian Folk, Blues and Americana with lyrics that explore issues of identity, loss and spirituality. In an age of cultural division and societal conflict, his performances have been described as raw, passionate, healing and uplifting.

Ajay's laid-back style transcends musical borders with a sound that flows from the banks of Delta Blues which influenced him as a child to the sacred river of the Ganges where he learnt raags from the Gurus in his father's hometown of Varanasi  the holy city of India. Blending these influences, he came back with what he calls Karmic Blues.

Ajay has over 15 years' experience in the music industry, chart success in two continents, toured the world and worked with legends.
As a guitarist Ajay has worked with artists as diverse as Jamiroqua, Gregory Isaacs, Zakir Hussain, Jah Wobble and Bollywood legend Shah Rukh Khan. He has had Top 10 chart success with his Hindi language solo albums in India and on iTunes with his world music band Botown. He is an accomplished international performer and a composer for the stage and screen.

Vinod is a percussionist with over 20 years of experience and classically trained under Yousuf Ali Khan and Pandit Shankar Ghosh.
He has performed a wide variety of styles ranging from Hindustani classical, fusion and pop with artists including the Grand Union Orchestra, Clem Alford and Jay Sean. Vinod has performed as part of the Para-Olympic Games opening ceremony in 2012 and at prestigious venues around the world including the Royal Festival Hall, Ronnie Scotts and La Salle des Etoiles (Monte Carlo). He is also a regular on BBC Asian Network and BBC Live sessions.

Available all territories through Frusion 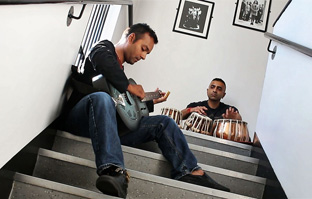