We were delighted to represent Grant and we are very sad to hear of his passing September 2017.
This page will remain for a while in memory of a great musician.

Hüsker Dü was founded by Grant Hart, Greg Norton and Bob Mould in 1979. Only 17, Grant Hart was nonetheless a veteran of a handful of previous bands and had already been playing music professionally since the age of 13. Hüsker Dü made several records for the legendary "SST" label including the much-loved "Zen Arcade", "New Day Rising" and "Flip Your Wig". Moving on to Warner Brothers Records in 1985 they made two fine albums, 1986's "Candy Apple Grey" and the band's second double album, "Warehouse".
Using a fake name, Grant produced all the visual art for the band, including all the record covers, some of which earned the band awards and helped secure the group's artistic aesthetic. Ironically, it was Grant's refusal to take the credit for this work that caused friction when other members insisted on receiving a fee for production of the records.
Leaving the group in 1987 to form first "The Swallows" then eventually "Nova Mob", Hart and ex-partner Mould became embroiled in one of rock music's most enduring feuds. The Hüsker Dü audience was already divided into two distinct factions before the band broke up. Afterward, Grant fans and Bob fans took turns finding evidence of friction in each man's solo work. Where they once were compared to Lennon and McCartney musically, they were now put into the roles of bickering ex-colleagues.

Beginning with his 1988 release, "Intolerance", Grant's solo records have been subtle, thematic renderings that move the listener along the route, building up to climaxes all the more dramatically. Grant's 2000 release, "Good News for Modern Man" continues with his practice of laying down all the instrumental tracks himself. This record was handicapped by label bankruptcy in the US, but was acclaimed by his listeners as the most fully realized record he has been involved in.

Grant's post-Hüsker band "Nova Mob" disbanded in 1997 when Grant's domestic partner and bassist moved to Holland to pursue other interests. During the band's career they made two full albums and five singles. Nova Mob's recording of Grant's science-fiction rock opera, "The Last Days of Pompeii" was the last record released by Rough Trade International before they ceased operations. The ambitious project was only available for a short period, but a new re-mix of the record is prepared to be released soon. Hart is currently finalizing negotiations for his next recording.

Although music is still Grant's main stock in trade, his visual arts skills remain as sharp as ever. In addition, he has recently taken part in several readings of his poetry as well as reading the works of his late friend Charles Henri Ford at the Metropolitan Arts Club in New York. He often performs with Patti Smith and has shared the stage with such notables as Charles Plymell, Philip Glass and of course his late chum William S. Burroughs. He currently serves such diverse organizations as The Duchamp Society, The Ghost Squadron of the Confederate Air Force and The Studebaker Drivers Club of North America. 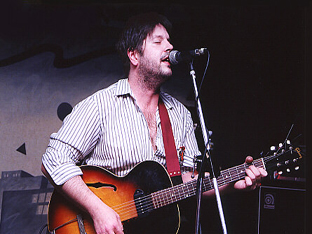