Booking exclusively world-wide Fizzion and Frusion are booking this live across the planet all territories.

We have an utterly unique performance, a combination of superb music and film, combining a film on general release with live video remixing provided by the film's director Timo Novotny providing a unique experience to each and every audience. It's already played many film festivals in IFF Karlovy Vary, IDFA Amsterdam, CPH:DOX Denmark Viennale and more.

This impressive cinematic essay takes us on a journey through the subway systems of several megacities around the world, it has a vibe similar to One Giant Leap and Koyaanisqatsi but with a very different edge, it's of now and in a sense timeless.

For the majority of people, the subway merely represents a reliable means of transportation that quickly and safely transports them to their destination.
Timo Novotny's audiovisual essay, however, reveals that the underground railway is much more. It is quite literally the seedbed of a wide variety of human stories (New York), a center of diverse musical production (Los Angeles), a favored locale of suicide and sexual deviance (Tokyo), a glitzy tourist attraction (Moscow), or an ideal place for study or relaxation. Set to the excellent, uninterrupted soundtrack by Sofa Surfers (rightfully dubbed the Austrian Massive Attack), the filmmakers accompany us through the underground railways of several world metropolises, discovering what makes them unique. Sometimes visually reminiscent of a classy music video, this whimsical movie stands out for its original visual treatment and effective interplay of music and image.
Timo Novotny, the visual mastermind of legendary Austrian band the Sofa Surfers, will scratch cinematic images as a VJ throughout this mesmeric performance.

Timo Novotny will take you through New York, Los Angeles, Moscow, Vienna, Tokyo & Hongkong, unleashing imagination at every destination with its distinctive palette of visuals and selection of sounds from Sofa Surfers.

The world-premiere of Trains of Thoughts LIVE was the 28th of August at the Opening of the AUSTRIAN PAVILION at the 13th International Architecture Exhibition of the La Biennale di Venezia 2012. And now after years of acclaim we bring this to you .. quite simply superb and a very cool addition to any programme. 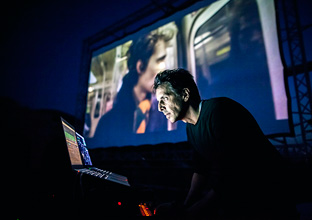