Ironically this superb singer songwriter is less known out of his home country/the UK .. and we hope we can change that here at Frusion as he is superb. Gentle thoughtful and with great depth both in his song writing but also his voice. Mellifluous and with hints of even Burl Ives (maybe you need to look both up!:-) but both give a feeling of both his recorded output but also his intimate and immensely satisfying live shows.

Paul also does workshops and is involved in a number of projects one of which we can offer "FOUND" a fascinating musical project around found old photographs .. As well as his own music Paul can be found most weekends playing Double Bass and Musical Saw with various local bands on the Isle of Wight playing everything from 1930s Jazz and hula, to eastern European gypsy music. Occasionally he'll appear on other releases, you can hear his double bass playing on the best-selling Michael Kiwanuka single I'm Getting Ready. 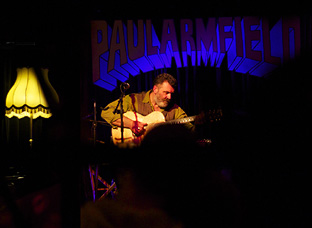