Is a whole-hearted singer songwriter raised on rock and folk by legendary parents (Mary Hopkin and Tony Visconti) and writes songs that reflect her upbringing and jobs in the real world. As happy in a club or a large theatre, and festival stage. Performing live with acoustic guitar, percussion strapped to her army boots, and partner Christian Thomas on bass. And we're delighted to represent her in all territories.

She's released three albums and finishing her fourth, all recorded wherever her studio happens to be - boat, campervan, cider farm, scenic viewpoint on the A470... with Christian at the controls.

Jessica often collaborates with her mother, Mary, running the label Mary Hopkin Music. They wrote and sung a duet together, 'Here it All Comes Again', on Jessica's first album, and Jessica sang backing vocals on Mary and Morgan's album 'You Look Familiar', among others. Jessica also represented both parents at Ralph McTell's 75th birthday concert at The Royal Festival Hall in 2019. Both parents have a history of working with Ralph, from his fourth album to his most recent, on which Jessica also sang.

She plays 12-string, saxophone, percussion and vocals in the Bowie supergroup Holy Holy with her father Tony Visconti and Spiders from Mars drummer Woody Woodmansey. They've toured the UK, Canada, Europe and Japan. In the USA, as part of a 9-week tour, they played Carnegie Hall and Radio City along with such stars as Debbie Harry, Robyn Hitchcock, Perry Farrell, Cyndi Lauper and Ann Wilson. Very often Jessica shared the support slot with her singer/songwriter/composer brother, Morgan Visconti. She's also sung on his album, 'Ride'.

2019 saw a Holy Holy UK tour and also a support slot for the second time on tour with psych-rock legend Robyn Hitchcock, as well as several solo dates and support slots with Cliff Bennett and the Rebel Rousers (with whom she guested on saxophone), T.Rextasy, The Blow Monkeys and Mark Morriss of The Bluetones. Jessica has also been taking the role of Sandy Denny with premiere tribute band Coda Led Zeppelin, duetting on the 'Battle of Evermore' and playing a support set.  She also contributed two guest vocals on 'Decades', an album by David Palfreyman and Nicholas Pegg and featuring, among others, David Warner and Sarah Jane Morris. 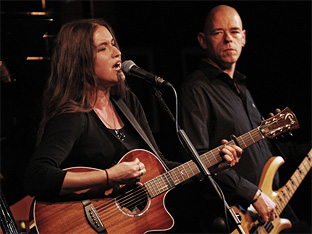