was founded in London in 2010 by the Croatian composer and saxophonist Mak Murtic. It has been dubbed as London's trans-idiomatic, alternative world jazz orchestras.

This new performance centres around the 19th Century Balkans and follows a protagonist through his life journey which parallels the ancient cyclical view of the world. The music draws from narratives in archaic South Slavic languages, folk music from the region, to contemporary jazz and comparisons ranging from Sun Ra, Tigran Hamasyan to Ivo Papasov. 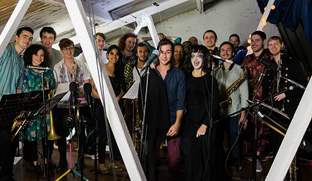