THE OTHERNESS (Argentina)
from La Patagonia to the World!

The Otherness are a young rock collective from Comodoro Rivadavia, La Patagonia (Argentina).

"A highly melodic soul-rock machine, like The Beach Boys with switchblades... From a country in love with rock n roll this is a band that is telling their own truth." (John Robb, LTW, Manchester).

"Among the most unique and exciting bands we've come across in ages." (Rob Sayce, Subba-Cultcha, London)

Martin, Gonzalo and Pablo started to play together by the end of 2009. They've toured Europe and Latin America and also published their self-titled debut album in early 2018.

Hailing from La Patagonia, "The Otherness" are aptly named. Why so? In a reversal of the British invasion tradition, where bands such as the Rolling Stones and the Beatles enlightened North America on the bluesy US roots of Rock n Roll, The Otherness toured tirelessly in the UK two years ago, bringing their own homespun 'other' brand of British and European rock music back to its source with a clear message. In the few years that they have played together, they have honed a very clear and proficient style of short, sweet and punchy tracks that usually don't exceed three minutes.

"Argentina is a country where people really believe in rock n roll. Watching The Otherness live you can see this  they are on the tightrope between The Beatles in Hamburg and the Ramones first album  that purity of vision and they are damned good at it. The Otherness are touring UK with a fantastic feedback from the young rock and roll, pop and soul British audiences all over the country." (John Robb)

The Otherness toured UK and EU (Germany, Denmark, Holland) between June and September 2018 and the tour was aimed at promoting the protection, improvement and proliferation of worldwide grassroots music. The band had an extraordinary impact in both rock press and the European and British audiences. Hence, they have plans to tour UK and Europe again around April 2019, to support the upcoming new singles entitled "Gotta Go" and "Few for the Stew" 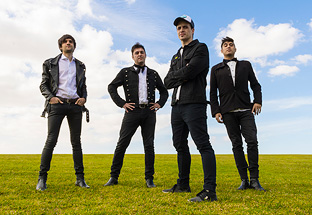