With the combined talents of outstanding widely respected and feted Sheema Mukherjee (Transglobal Underground/National Theatre/Imagined Village and much more. Link here to her own page on Frusion), a long-time friend and who I've represented for many years) Sheema has collaborated with internationally renowned artists such as Courtney Pine, Sir John Tavenor, Martin Carthy, Bobby Mcferrin, Natacha Atlas, Noel Gallagher & Cornershop, Mercan Dede. She has toured the world widely & key performances Montreux Jazz Festival and the Olympia-Halle (Munich), supporting Jimmy Page and Robert Plant throughout their European tour (1998), the Olympics Arts Festival for Sydney 2000 and also makes regular appearances at WOMAD (UK)

Working in this project with the greatly talented Emily Hennessey a bold and dynamic performance storyteller, with extensive travel in India kindling in Emily a great love of Hindu mythology. Travelling over 10,000 miles across India by train, bus, rattling rickshaw and rickety bicycle. Lived/worked with a yak-herding family on the Tibetan plateau, studied Kathakali dance-drama in Kerala and spent several months at the Kattaikkuttu School in Tamil Nadu, learning from the children who perform stories from the Mahabharata through music, dance and song from the age of 4. Emily has toured in India with the British Council and performed at the Kathakar Storytelling Festival in Delhi. Other recent performances include the Soho Theatre, the Royal Opera House and Beyond the Border Storytelling Festival.

Emily and Sheema have been fusing live storytelling and music for 5 years, specialising in Indian mythology with music that draws on both Indian classical and contemporary traditions. With a style that is highly accessible and deeply engaging, they have toured a wide range of venues including British Museum, Soho Theatre, York Theatre Royal, Rich Mix, Northern Stage, Ancient Technology Centre, festivals such as Beyond the Border and storytelling clubs across the country.

"exhilarating, evocative, vital. a wonderful piece of theatre - pure in its ideas and retelling a fantastic story vital for both Hindu and modern culture" - Theatre Bubble

"Sheema is a sitar prodigy" - Billboard

From demure housewife to bloodthirsty goddess, gurgling infant to elephant man, meditating sage to cosmic fire-eater, Hindu mythology illuminates a mind-blowing world of radical transformations. Kali is one of the wildest shape-shifters of all. Demon-slayer, Life-saver, Supreme-Mother, Destruction-dancer; this goddess is truly Awesome. When an evil power spreads its clawed hands across the world, Kali's time has come.

When the River Goddess leaps from the skies, only Shiva's hair can catch her wild torrents. But still she roars, surging from mountains to sea, leaving no stone - or ego - unturned as she washes illusion from the truth. In the heavens, bored brothers steal the holy cow and face a terrible punishment - a life on earth! A king has more sons than space but taking a fancy to the Sky God's palace is never going to end well. A woman journeys deep into the kingdom of death to demand the impossible. And when a tiny fish flips out of the river, a young girl holds the end of one world and the beginning of the next in her hands.

Deep in the forest where Rama & Sita live in exile, eyes watch their every move and the universe shimmers with illusion. When Sita is kidnapped by the ten-headed demon king, Rama needs all the help he can get. Who better to have on your side than a shape-shifting monkey? But there's only one thing worse than a bloodthirsty demon, and that's his Big Brother. As Rama lies helpless on the battlefield, it's time for Sita's little known story to unfold. 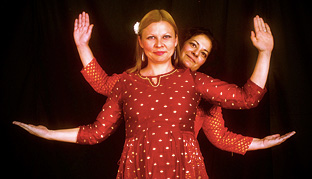