This page for Overload remains in place in memory of Farhad Humayun who passed on in 2021 . Way too young and massively talented. Enjoy his art here and through the links .. RIP Farhad a true talent and nice guy!

We just love this band ... its reputation as the loudest band in Pakistan really only hints at what to expect .. its a glorious mix of rock, roots and absolute power .. with at its heart the drumming of Farhad Humayun perfectly integrated with Keys and Synths from Sheraz Siddiq and the amazing Hassan Mohyeddin on Percussion .. on occasion supplemented with other mega musicians from Lahore. One thing to say and really be aware of is that this band has broad appeal well beyond its native Punjab Asian origins ... we'll be touring them far and wide .. just watch out..

Signed to Universal music and with one hell of a sound and amazing show, take a look at the videos to get a feel of what Overload is all about. We are looking after the band multi - territory including the UK of course .. simply ask and we'll get them to blast your audiences as soon as we can.

They released two studio albums and two live albums. The band released their debut self-titled album Overload in December, 2006. The album charted at the top in the Pakistani music charts and singles from the album included instrumentals "Dhamaal", "Cursed" and "Storm". In 2008, their single "Dhamaal" got nominated for the "Best Music Video" award at the Lux style awards. 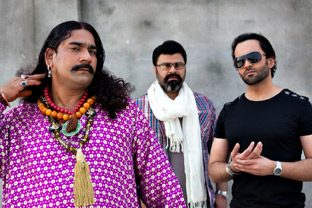