When Jonny Wilson started Eclectic Method, he created a project so progressive that the simple tag of VJ would never do. Having done over 600 shows in 36 countries on 6 continents with 20 MILLION view on line, 14,000 YouTube subscribers and over 500,000 twitter followers he's a force to be reckoned with.

Wilson constantly pushes the technology to improve video remixing and create compositions that perk ears, move feet and capture moments in time. If the online videos hit the brain like a jolt of adrenaline, the concerts allow time for builds, breakdowns and larger narratives that led Paper Magazine to declare: "It's the best of both worlds: girls get to dance, and guys get to watch TV!" Indeed, Eclectic Method is music, media and pop culture all rolled together into one a giant party. With supreme success in USA via live appearances mainstream TV massive work for the most established companies in the world and ultra cool shows this English artist is now back in Europe and raring to go, we are working with Eclectic method in all European territories and if you need to know more just ask. In the words of WIRED magazine "the future"

"So downright impressive it slightly boggles the mind" - THE GUARDIAN
"The best in video remix. Must be seen to be believed" - NEWSWEEK
"out-of-this-world dance remix" - MASHABLE
"The Next Big Thing" - THE TIMES
"Internet genius" - CAMPBELL BROWN, CNN
"the mixing Jedi" - STARWARS.COM
"Nothing is safe from being remixed" - THE HUFFINGTON POST 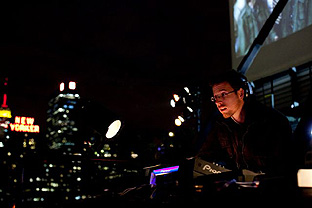