So delighted we are to be representing in all territories the legendary Freak Power formed in 1993 by Norman Cook aka Fatboy Slim and Ashley Slater.

It was the greasy, illegitimate love child of Beats International and Microgroove.
They recorded their first studio album in Brighton in 1993, using a combination of tunes adapted from what was intended to be two albums, the first being the Beats International follow up to Excursion on The Version and the Microgroove follow up to The Human Groove.
The album was initially released on 4th and Broadway in 1993, with the first single, Turn On, Tune In, Cop Out being released in the spring of that year.
Fast forward 20 something years, and Ashley is back with a Freak Power band which is more energetic than the original (thats what happens when you get a great guitarist in) and features some of the great original players from early Freak Power and Microgroove days.

The current line-up is Ashley Slater on Vocals and Trombone, Dale Davis on bass, Tony Remy on Guitar, Carly Bryant on Keyboards, Adam Bushell on Drums, Kate Cameron and Nicola Bright-Thomas on Backing Vocals.
Their set is powerful, energetic and lyrically, still annoyingly timely. They play tunes from across both albums and will start to incorporate new material into the set as its recorded and released.

Kicking ass all over the place and available all year round ASK for details right here right now! 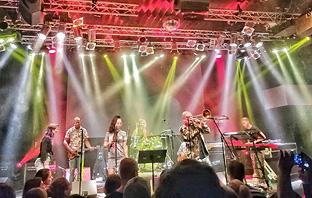