Frusion are supremely happy to welcome this unique duo to the roster, having caught them at End of the road festival in 2013 with a rich history behind them their direction remains resolutely their own. Mixing electronic with their own vibe and indie rock vibes .. we remain convinced you need to book this brilliant duo.

Seventeen Evergreen are "cognitive computers", singers and multi-instrumentalists Caleb Pate and Nephi Evans. From the breezy land of lush trees and Pacific shores otherwise known as San Francisco, their name was chosen for its sound and symmetry - it is taken from a lyrical couplet in a psychedelic song by an early incarnation of King Crimson.

"Seventeen Evergreen may be about to follow in the footsteps of such indie-oddball crossovers as Mercury Rev, Flamin' Lips and Midlake" - The Independent 5/5

"mixing rock and electronics they mine the same louche, special box of ballads as AIR, early 1970s Pink Floyd and Sparklehorse, but with a definite West Coast twist that suggests hallucinogens ingested under desert skies" - The Times 4/5 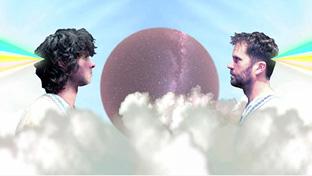