Here at Fizzion we are delighted to work with We Used To Make Things, a Hackney-based 8-piece indie-pop band brimming with melodic hooks, fat grooves, big horns, incisive lyrics and vocal harmonies the Beach Boys would be proud of.

Their story begins four years ago when singer Matthew, a Yorkshireman, lost his job as a youth worker running a successful music project for young people in one of the most deprived parts of North London. The result of the austerity that came in the aftermath of the financial crash of 2008. Left disillusioned, Matthew started to write lyrics that helped him poke fun at the absurdity of the world we live in.

This was the catalyst for We're All Fucked Up.

At the same time an early incarnation of the band was taking shape around Matthew, Ben (drummer and producer) and Marv (guitarist) - the band's songwriting team. Together they had a dream of combining their own original mix of The Specials horn section, The Kinks' worldview, The Beatles' hooks, The Beach Boys' harmonies, Divine Comedy's wit and Elbow's grandeur.

They then chose a name that hints at both the disillusionment within post-industrial Britain but also more personally at the danger - as adults - of losing the ability to play, make mistakes, be creative and ultimately, make things.

The songs on this album are shaped by warm, witty lyrics about dissatisfaction, personal politics, open plan offices and the kind of characters Mike Leigh and Pinter would be proud of. It is in turn funny, poignant and angry but also very good to dance to.

We're All Fucked Up is their debut single and a state of the nation address that highlights that it's not only the world that is inherently unhinged. People are always looking for differences so why not celebrate our similarities.

It's magnificent and fucked up but aren't we all?

Booking all territories .. ask and NOW 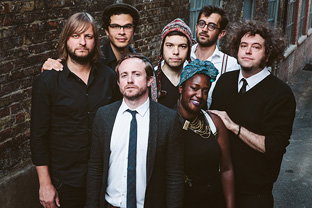