We just love this artist, combining minimalism electronica throw in a little dub step, drum n bass and a great stage presence, captivating and really cool in the best sense of the word.

Is a huge talent from Poland as an actress and singer. Karolina gained great media attention and most importantly - listeners' hearts with her version of The Tiger Lillies' "Heroin and Cocaine" (titled: "Hera, koka, hasz, lsd") performed during the 35th Actor's Song Festival. Things went big with the video of the performance going viral. Getting nearly 20 million views on You Tube at the time of writing (early 2016)

2014 was crucial for Karolina in many ways, her EP "Córka" (eng. "Daughter") recorded and released that year has gained commercial success and critical acclaim, her acting career took off and she developed the sound of her music and her band plus live performance to give a great stage show and the many videos now on youtube attest to her magnetic sound and personality on stage.

You can book shows both with band (drums, electronic, live brass section) and as dj-sets. 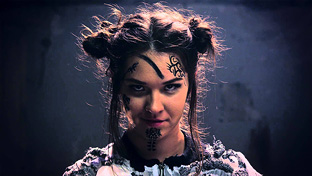