Different, challenging and vital, yes this and lots more. As the Vile Assembly evolve expect to hear and see (and think, we hope) a lot more with a unique take on how they represent themselves whoever they may be rest assured this is a great "band"/artist(s). All may become clear as time passes, but for now, know this.
Debut British punk-rock band, The Vile Assembly, were created solely to be the whistle-blowers on unjust society; their purpose to say what needs to be said through the universally understood medium of music. The band was created following a fortuitous meeting between three lifelong friends in a New York café, who decided that enough was enough and the troubles of the world needed to be voiced.

Although the friends, Paul Mason, Mark Webb and Mark Wainwright, had owned a music studio in Liverpool for two-decades, they'd never even contemplated making music of their own until that fateful day, until the avid conversation between them spurred on the conception of The Vile Assembly.

"The royal pardon, is for these regal brutes, but our vengeance will burn their flag and melt their pot of jewels"

The seeds of The Vile Assembly's ethos were planted over two decades ago, but lay dormant, waiting for the right time and agenda for their opinions to find a voice. A vocation to be a poet, Paul Mason (the band's lyricist and vocalist) found everything that happened in the world as vile. Out of choice, he opted to live on the streets of Liverpool for a month so that he could experience destitution first hand. With no gap or respite, he repeated the experience in San Diego. The result was horrendous, but inspired a batch of poems, the main being The Lonely Tramp in Liverpool'.

Within this framework you have music, both thought provoking and insistent also creating an amazing buzz within this thing we call the music industry but also far beyond. 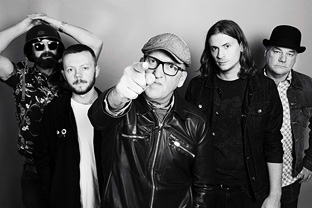