BalkanBeats is the Drug, Robert Soko the Dealer

It's a lifestyle; a feeling; and in the last couple of years it's expanded from a European to a world-wide phenomenon. From Bosnia to Brazil, BalkanBeats has people hooked.

Robert Soko has been throwing parties in Berlin since 1993. He was the first to coin the term BalkanBeats to try and define his mix of music from the Balkans. BalkanBeats are Serbian Gypsy brass and folk melodies reinterpreted, given electronic beats and blended with western styles such as ska and rock. In the recent past the phenomenon has caught on in other cities around the world where Balkan immigrants live. BalkanBeats parties rave all the way from Frankfurt and Vienna to New York and Melbourne.

Robert grew up in Zenica, central Bosnia, listening to western music: rock and roll, punk and ska. In 1990 he left Bosnia for Berlin. He took a job as a taxi driver and started hanging out at the Arcanoa, a punk bar in Berlin's immigrant quarter Kreuzberg with his ex-pat friends. The Arcanoa became their second home. Soko put on his first parties there, playing his Yugo music for fifty German marks and beer for free. He celebrated socialist holidays: Tito's birthday, Day of Women. May First. The parties were a mix of irony and nostalgia and Soko was surprised to see how many people came, as nostalgia for Yugoslav socialism was not the 'in thing' in those days of growing Balkan nationalism. And yet the parties grew.

Then something happened. After years of listening and playing western-derived rock, punk and ska, Soko found himself returning to his ethnic Balkan music roots, the roots he had rejected as a youth in Bosnia. This was largely due to two figures, Goran Bregovic and Emir Kusturica. Bregovic who revamped Balkan Gypsy melodies, making Balkan music palatable for a western audience, and Kusturica, for whose Gypsy inspired films Bregovic did the soundtracks. And Soko played new/old Balkan music. And people loved it. Women grooved to it. Guys pogoed to it. It was a sensation. The press took notice. From the Arcanoa, Soko moved onwards and upwards, first to the Mudd Club, then to the Lido, all the while spreading the party fever to other cities around Europe, to New York, L.A., South Africa and Brazil. 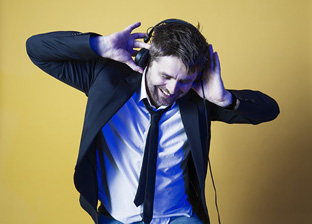