Lenka Dusilová, several times over the winner of the Czech annual Andel (Angel Czech grammys) awards, is by no means used to stagnation or repetition of things done before. Shes evolved into an outstanding phenomenon of the Czech music scene and into Europe: having been signed to Universal and having a rich career already from her launching pad as a rock and pop star, she's progressed to a unique and exciting artist ...

Dusilová won the Angel Award for best female vocalist in 2000, and has been voted best female vocalist every year since 2000 by readers of Czech music magazine Report. In addition to her solo work, since 2000 Dusilová has recorded and performed with the Czech folk-rock band Cechomor. She appeared on the band's album Promeny (Transformations), produced by Jaz Coleman. Coleman merged Czechomor's electrified traditional sound with the symphonic power of the Czech Philharmonic Collegium.

Now with her new band Baromantika in 2013 going into the future you have one wonderful artist and sound with a superb album out .. .inventive and superb live.. ask now for a chance to enjoy this original artist at your venue. 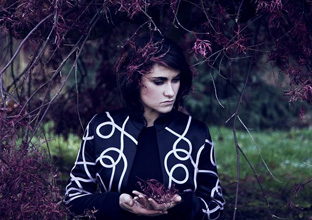