The name The Stroy comes from the Slovene word stroj' which means a machine'. Pronounced together with the' the phrase sounds as destroy'. The Stroy is a pun with two meanings: machine and destruction.

Above all it's a spectacular show with echoes of STOMP but way beyond. The Stroj was formed in 1997 - originally a percussion band, consisting of eight members who used plastic and metal waste barrels, discarded machine parts and various working tools to make their music. Distinctive percussive compositions, based on striking, mechanically structured rhythms and industrially sounding percussion instruments marked the collective's early work.

The Stroj became known mostly for its striking music performances, based on expressive rhythms, created by using non-conventional percussion instruments, spectacular pyrotechnics, and unusual concert venues like stone quarries, mines, a remade city bus and various industrial buildings. In the past decade The Stroj have performed at many festivals across Europe and have worked and evolved all the way up to the present day. 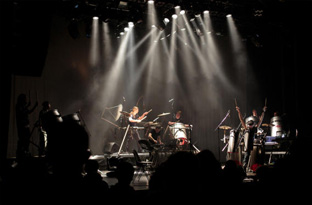