We do unique often at Frusion and in this duo its difficult to explain how cool they really are. From Austria and best described by my good friend Christoph Moser as punk polka. Formed in 1990 and In the band you ask what ? Drums / vocals and diatonique accordeon / vocals with excellent use of effects. They've been around a long time in Austria and have an uparalleled career creating movies and even attracting the attention of the sadly departed John Peel ... they've toured the world extensivly from Malaysia to Vietnam to Siberia to Pakistan and of course Europe

Attwenger's music is an unusual combination of Upper Austrian folk music and hip-hop, with lyrics sung (and rapped) in Upper Austrian dialect. Falkner often plays his accordion through effects pedals to give his instrument a distorted timbre similar to that of an electric guitar. Binder sometimes uses drum machines!

BBC DJ John Peel "I have no idea what it's all about, but I like the general noise a great deal." 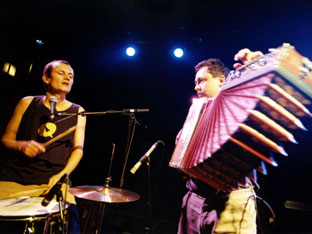