Swing Republic began life as a project for a platinum-selling Danish producer (who co-wrote Germanys biggest selling album of 2010). He began remixing the swing music that he loved with modern beats and licensed several tracks to various compilations, most notably On The Downbeat, (which was, incidentally, the first tune he wrote in this style). Now, following a sell-out run of Swing Republic 12 singles, CDs and the huge success of the download albums, we have decided to respond to public demand with live performances.

Swing Republic deliver an infectious 21st century dance-floor sound. taking on a cracking selection of vintage swing classics and 21st century chart toppers. Not in a jive-bunny way, but with a taste and respect that refreshes the originals rather than overwhelms them. Not only does the album as a whole steer clear of some of the emerging clichés of the new genre by avoiding a default swing-house style, but it also eschews the more obvious choices of source material instead branching into fresh areas of 40s R&B, Jive and even Blues to stunning effect.

The one hour show has some truly amazing gems in it (Crazy In Love, Drum Boogie, Peas & Rice, Cryin At Daybreak and more). Many of the tunes are familiar, some have made their way into advertising, film and TV, all are big hits on You Tube.

Swing Republic perform live as a duo with singer Karina Kappel. The act can perform also perform as a trio of four piece depending of course as always on your requirements and fees. 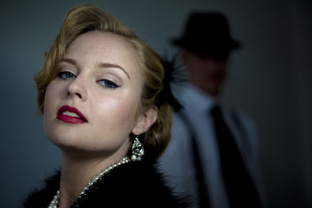