We are able to offer a unique audio/visual experience with this legendary composer and keyboard player in that a screening of the original Dante's Inferno (Italy 1911) Italy's first ever feature film, and an incredible visual experience in its own right. Together truly unforgettable.

With live music from Maurizio Guarini, he's a legendary figure in rock and also in film music, especially when his old band Goblin did the music for the infamous Suspiria horror film in the 70s. He started this live project in 2017. The director of the Italian Institute of Culture in Canada had the idea and asked if Maurizio wanted to do a live soundtrack on the occasion of the International Seminar on Critical Approaches to Dante organized by the University of Toronto.

"I saw this incredible movie from 1911 - the first Italian feature film ever. and I took up the challenge"

He is now based in Canada a composer and multi-instrumentalist born in Rome, from the legendary Italian prog rock band Goblin joining in the spring of 1975, part of the very first live line-up. The band's major hit "Profondo Rosso" reached the top of the charts for a few months, and the band toured Italy.

Maurizio left Goblin at the end of the recording of the "Suspiria" soundtrack, again a legendary horror film in November 1976, eventually re-joining, with a renewed line-up, in late 1978. He participated in the production of the band until 1983, including "Volo" (the only Goblin Pop detour experience) and several soundtracks, including "Buio Omega", "Contamination", "Patrick", "St.Helene's" and "Notturno".

Over the same period Maurizio performed as keyboard player and contributed to several soundtracks - mainly horror and thriller - including Lucio Fulci's movies The Beyond, City of Living Dead, Zombi 2 and others, among the most popular cult movies in this genre made around 1979 - 1981. Until 1990 Maurizio kept working as a performer and composer/arranger with the major artists on the scene, both in studio production and live concerts. 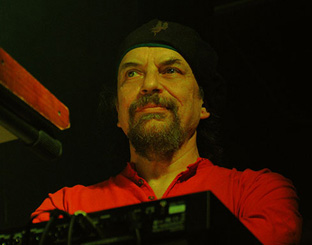