Aspencat are currently THE band from Valencia and one of the key artists of the genre in Spain.

We are so pleased to represent this kick ass band ... wow doesn't come close ... working with the ultra cool Exits agency in Barcelona simply ask and we'll deliver this amazing sound to a stage near you.

Nine musicians with a long varied and noted careers, ska, and dance based reggae "rebooted" with ULTRA powerful electronic music. Strength, power and dynamism, a mix that few bands reach on stage. After appearing on the cover of top musica magazine Enderrock, in September, Aspencat released their new album "Tot és ara" (Halley Records, 2015). In only 24h hours they achieved more than 60.000 downloads on the website, currently passing 80.000. Presenting the album at Mercat de Música Viva de Vic, at La Mercè in Barcelona and Fires de Sant Narcís in Girona during this autumn 2015, among many others.

More than 200 concerts around France and Spain.

With tours Essència (2013) and Antimatèria (2014), Aspencat blew away audiences far and wide. Festivals throughout Europe and Spain, the numbers confirm that, one year and a half on the road Rototom to Viña Rock, Clownia Festival, Anòlia, Acampada Jove, Fira Mediterrània, Mare Rock, Aupa Lumbreiras or Esperanzah!, amongst many others.

Essència (self-produced, 2013), was praised by press and audience alike as one of the best albums of the year. The numbers and prizes they have been awarded with Essència highlight the success achieved by Aspencat since April 2013. More than 100.000 downloads from the website, 5 nominations to Enderrock Prizes, second position to Disc Català de l'any 2014 and the winner of two Ovidi Prizes.

The "Tot és Ara" Tour began with both in Catalonia and Valencià and will continue throughout 2016 into 2017 don't miss the chance. 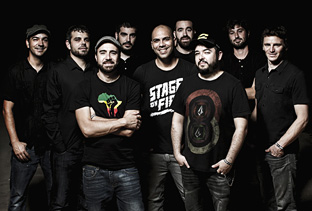