No one remembers the date of its inception, but Mad Meg have existed, in some form, for centuries. The earliest known depiction of Mad Meg is a 1568 rendering by Breughel the Elder, called Dulle Grete: armed with frying pans, kitchen knives, and other peasant implements, a motley gang of ruffians stages a hodge-podge assault on Hell itself.

So this is now from the heart of New York...

The leader of Mad Meg, Russian-born poet, photographer, lunatic Ilya Popenko, is a towering and unpalatable figure, whose morbidly fascinating performance style and zombie-like singing does nothing to elucidate the profundity, charming self-deprecating irony, and expressive subtlety of his songs, written sometimes in English, sometimes in Russian. These qualities are further obscured by the clamoring instrumental accompaniment of his assembly of sidekicks, who play in an eclectic style they themselves haphazardly identify as Punk-Chanson-Noir.  Assembled and based in New York, the eclectic and hard-rocking band, with overtones of Eastern European existential anguish, have toured extensively in Russia and the former Soviet Bloc, including tours that covered close to 30 cities throughout the vast, frozen expanse of Russia, and in the course of which they shared the stage with such luminaries as Nogu Svelo, and Emir Kusturica and recorded a live album in a female prison in Lithuania. 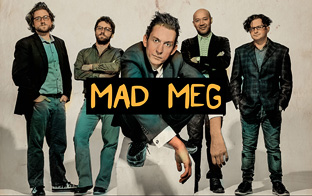