Furthering our alternative ventures at Frusion we're no working with the legend that is Attila The Stockbroker and his splendid band Barnstormer.. we can say nothing more than this from the great man himself..

Sharp tongued, high energy, social surrealist rebel poet and songwriter. His themes are topical, his words hard-hitting, his politics unashamedly radical, but Attila will make you roar with laughter as well as seethe with anger......
Inspired by the spirit and the 'Do It Yourself' ethos of punk rock, and above all by The Clash and their overtly radical, political stance, he started as a punk bass player in 1977 and took the name Attila the Stockbroker in 1980, blagging spots for his poems and songs in between bands at punk gigs. He quickly got a couple of John Peel radio sessions, a deal with London independent label Cherry Red Records and before very long was on the cover of 'Melody Maker'. He hasn't looked back since!

Attila was official Poet in Residence/PA/Announcer/DJ at his beloved Brighton & Hove Albion F.C. for 14 years and (as the leader of 'Seagulls Ska') got to Number 17 in the Top 40 on 9th January 2005 with a new version of the Piranhas' 'Tom Hark' - part of the campaign for the Albion's new stadium... which we've now got.

As well as all his solo gigs, where during his songs he accompanies himself on mandola, Attila plays violin, bass guitar and a variety of early music instruments and from time to time gigs with his band,

BARNSTORMER, a unique and energetic mix of punk and early music!

"A popular poet who actually earns a living at it rather than sitting in a garret feeling sorry for himself" (The Observer)
ATTILA THE STOCKBROKER
668 - NEIGHBOUR OF THE BEAST! 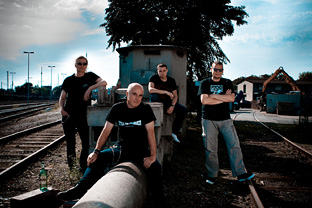